My Messages
You have no Messages at the moment.
You will get access in group chats once you are connected with others in a trip.
Chloe Spent A Whole Month Adventuring Australia’s East Coast In Her Campervan
What is GAFFL?

Chloe is a freelance travel writer, blogger, and digital nomad (when the world permits!). She writes extensive travel guides, budgeting tips, and advice and foodie recommendations on her blog at www.imjustagirl16.co.uk and she’s also written for publications such as Culture Trip, Bookaway, and Rough Maps.

Before the pandemic hit, Chloe spent 11 months traveling around New Zealand, Australia, and seven countries in Southeast Asia with her boyfriend, and they had no intention of returning home. You can connect with Chloe on GAFFL. 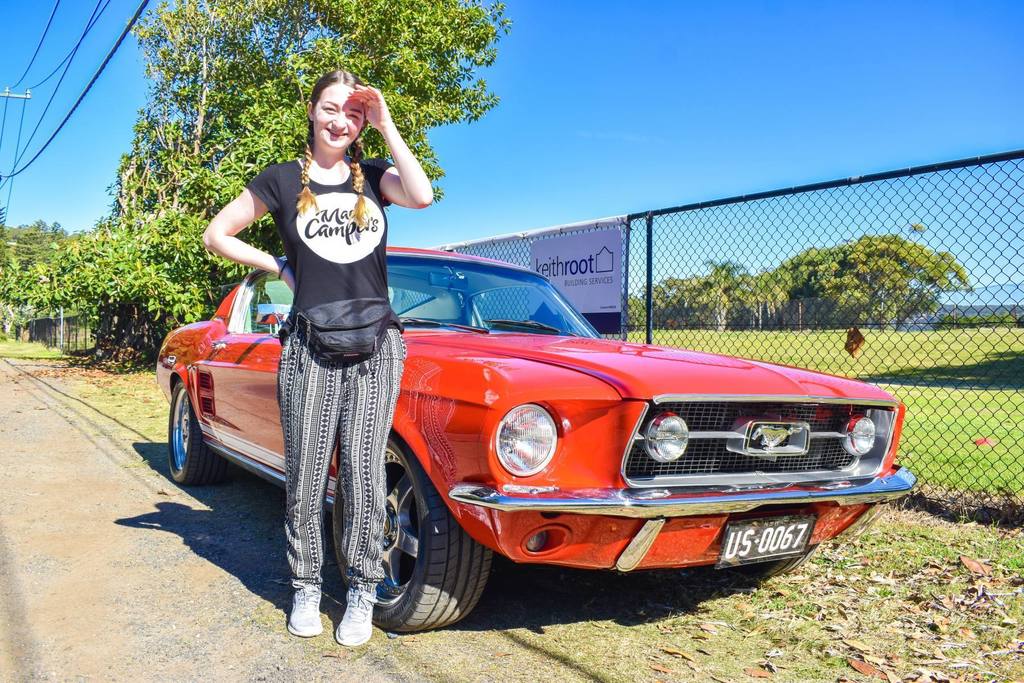 The Inspiration Behind Our East Coast Australia Trip

We spent five weeks traveling around South Island New Zealand in a campervan and we absolutely fell in love with van life, so when we decided to head to Australia after New Zealand, we knew we wanted to continue our campervan adventures. The East Coast of Australia is so beautiful and perfect for campervan life, so we put the plans in motion to make it happen!

How We Planned For The Trip

We actually left it to the very last minute (we only confirmed everything six days before we were due to pick up the van in Melbourne!), which worked out well for us because we collaborated with a campervan company during our trip so we received a media discount. Our trip was also in July, so it wasn’t crazy busy as campervan rentals are usually booked up weeks and months in advance during Australia’s peak season over their summer months (December to February).

Read more: A Beginners Guide To Buying A Campervan In Australia 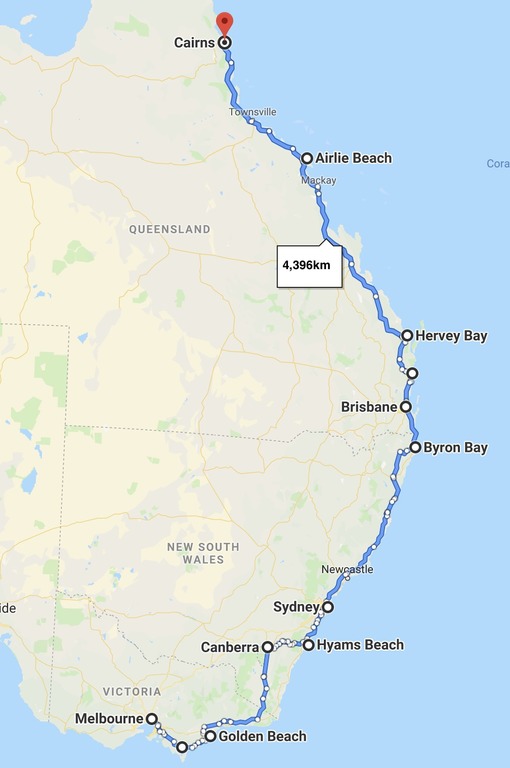 How We Packed For The Trip

As we were traveling the world indefinitely at this point, the only belongings we had with us fit into a 15kg backpack that we took with us all across New Zealand, Australia and Southeast Asia, so we didn’t actually pack anything specific for our campervan trip. However, after our experience in New Zealand in a campervan, we already had quick-dry towels, waterproof clothing, hiking boots and we were well equipped with the best road trip snacks!

When we landed in Melbourne, we spent five days in a hotel as we wanted a tiny bit of luxury after spending the previous five weeks in a campervan in NZ, before we headed back out onto the road again!

After we’d picked up our campervan in Melbourne at the end of our five days there, we headed to Toora Tourist Park for one night, then to Golden Beach the next day, then Canberra and then Bream Beach where we stayed one night in a campervan park that was home to over 40 kangaroos! 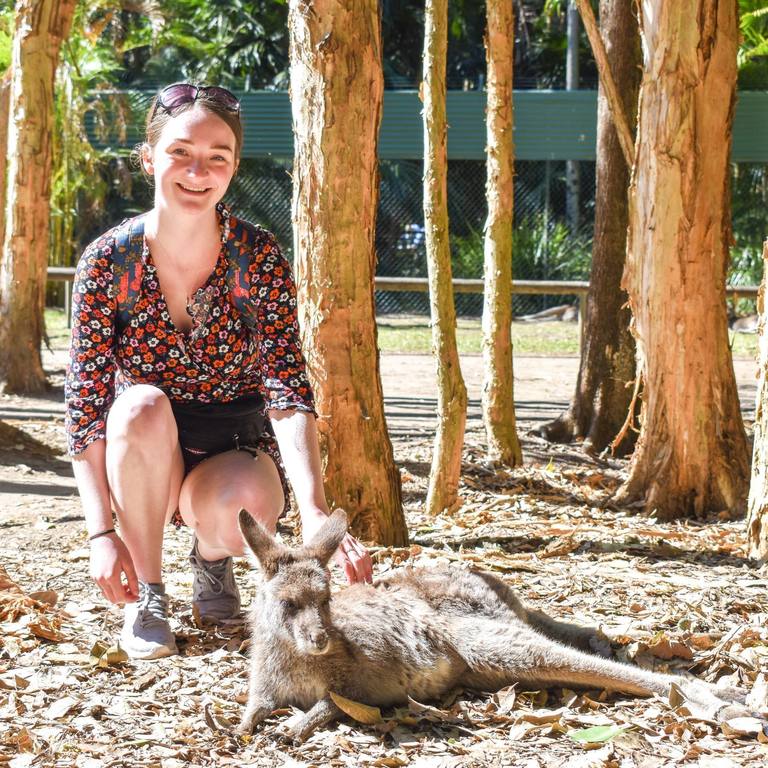 After that, we headed to Hyams Beach which is one of the most spectacular beaches I’ve ever seen in my life and then we drove to Bondi Beach in Sydney where we stayed one night with family, before heading to a campsite just outside of Sydney city centre for a few days while we explored everything the city had to offer.

Next, we traveled to the Central Coast and spent two nights there before moving onto Port Macquarie and Coffs Harbour and then onto Byron Bay for a couple of nights.

After Byron, we drove up to the Gold Coast (which was one of my favorite places on our trip) where we stayed with more family for a couple of days.

We then moved on to a small place called Beenleigh where we stayed at a campsite next to a shopping centre so that we could get some work done for a few days.

After that, it was time to move to Brisbane and then onto Glass House Mountains and eventually the Sunshine Coast where we paid a visit to the Australia Zoo.

We then traveled to Noosa Heads National Park and Hervey Bay before spending almost ten hours the next day traveling to Airlie Beach.

From Airlie Beach, we took a boat trip to the Whitsunday Islands which was beyond magical. We then continued up the coast to Townsville where we spent a couple of nights before driving to Cairns for a few days, during which time we took a trip to the Great Barrier Reef where we went scuba diving; it was one of the most insane experiences of my life!

Read more: 11 Best Day Trips From Cairns and How Much They Cost 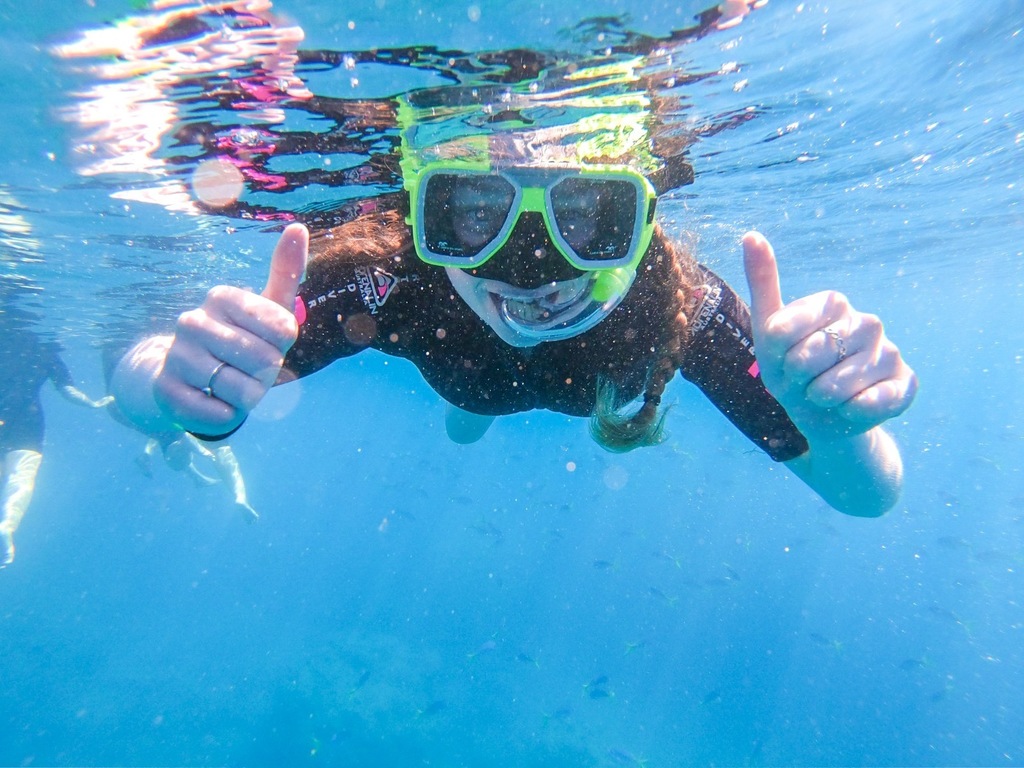 We then returned our campervan to Cairns and then flew to Bali! You can read more about my full East Coast road trip itinerary!

We Met Friends Along The Way

We met some of my boyfriend’s family for the first time who live in Sydney and the Gold Coast and we stayed with them for a few days. They even took us out on a day trip around some of the best beaches in Sydney in their 1967 Mustang!

We also met one of my blogging friends from Gibraltar who lived in Brisbane at the time and she showed us the city’s nightlife! We also met many locals at every campsite that we stayed at and it was always great getting to know new people, even if it was just for one evening and then we never saw them again!

Read more: How A Study Abroad Vacation Made Olivia Relocate to Australia

Food To Try On The East Coast

As we were in a campervan for most of our trip, we mostly cooked our own food that we bought from local supermarkets.

However, we did eat a lot of barbecues during our trip, which certainly can’t be missed, especially if you join one on the beach! We also tried kangaroo burgers and Vegemite for the first time; the burgers weren’t too bad but I’m definitely not a fan of Vegemite!

My Favorite Memory From The Trip

I have so many incredible memories from this trip that it’s hard to just pick one! Scuba diving in the Great Barrier Reef was definitely a “pinch me” moment, and I also adored seeing the Whitsunday Islands as well. 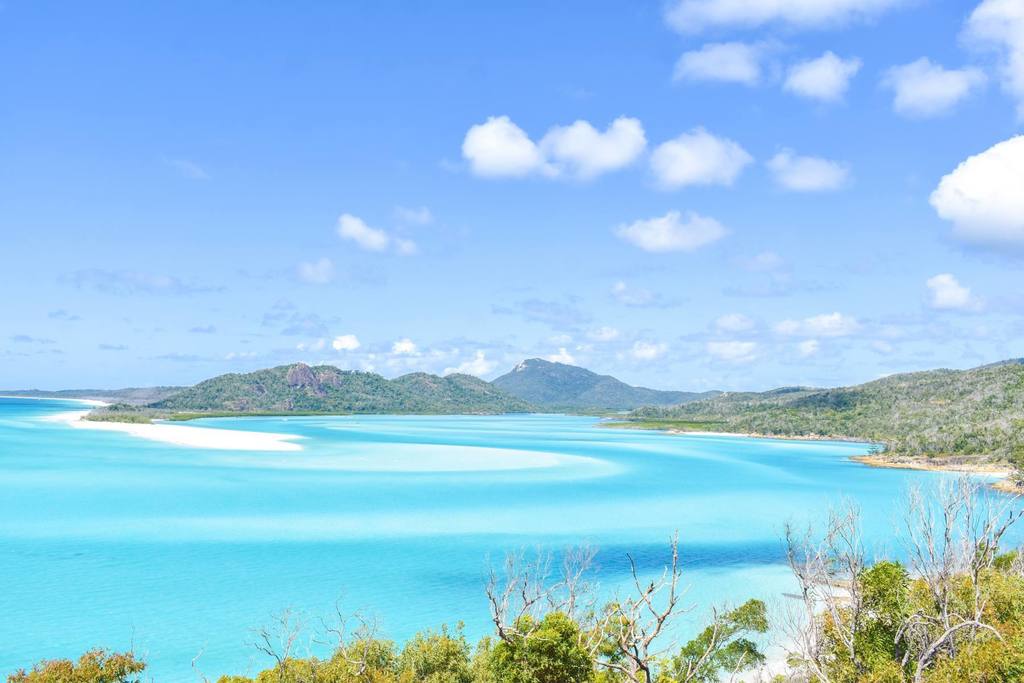 We spent approximately £1,682.88 each in Australia during our almost-five week trip. This includes everything from campervan hire, petrol costs, food, accommodation, campsite costs, and activities.

You can save money when traveling to Australia by using companies such as Greyhound buses to take you around the country. These are very popular but we found the idea of them to be too limiting as they only stop off at certain points, which is why we hired our own campervan.

Hiring a campervan and traveling around in that can also help you to cut costs as you have your transport, food (at least, cooking facilities), and accommodation all rolled into one.

Read more: How To Travel Around Australia On A Tight Budget

Recommendations For Sights Not To Be Missed

Some of my top sights and activities to enjoy along the east coast include: 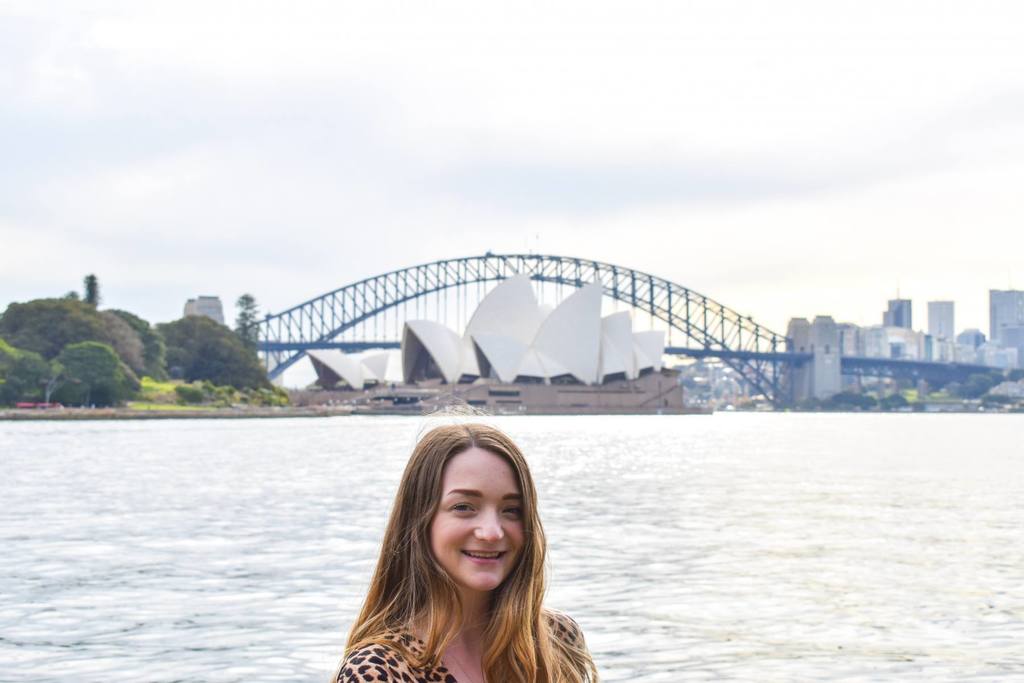 My advice would be to have a rough idea of the kind of route you want to take (e.g. do you want to go all the way up the East Coast, or just do a section of it?), figure out your rough time frame and try and plan accordingly.

We’re very much spontaneous travelers so we didn’t really plan where we wanted to go/stay too much, we just knew that we had about one month to travel from Melbourne to Cairns.

Another tip would be to choose a good road trip buddy if you’re doing the trip with another person! You’ll be spending a lot of time on the road with them, so you need to ensure that you get along well!

Tired of traveling alone? Connect with users from over 190 countries to plan trips and travel together!
Try GAFFL
Travel Stories
This Traveler Shares Her Secrets to Saving Over 50% Travel Costs in Hawaii
Hot Pools, Ziplining, Jet Boat Ride & High-Fly Indoor Skydiving in Queenstown- All in Just 4 Days!
How Haritz Traveled the Australian West Coast in Just 15 Days!
This Couple Has Their Distinct Way Of Traveling And Emphasizes Exploring Destinations Locally
Author, TEDx Speaker, and Adventurer: Heidi Is Constantly On The Move Hiking, Kayaking, Or Refuel...
Road Trips
This Former Racing Cyclist/Mountain Runner Has Spent The Past 30 Years As A Budget Traveler Explo...
10 Best Tips For Exploring Zion National Park
Gibb River Road 6 Day Itinerary
20 Best Day Trips From New York City
Medha Did 10 Days On The Ring Road In A Campervan And Shares Everything You Need To Know To Have ...
Travel Itineraries
Here's How Léa Spent A Few Snowy Nights In Peru
18 Months Road Tripping The Coast Of Australia During The Pandemic With Angélica
Exploring The Best Of Magnetic Island With @Ifwegoto
Slowdown & Unwind In New Zealand's North Island With This Perfect Itinerary From @nutbrownrose_
Here's How James Spent A Month In Japan During The Pandemic