My Messages
You have no Messages at the moment.
You will get access in group chats once you are connected with others in a trip.
From Being A Couch Potato to Everest Base Camp
Published by GAFFL
Last updated - 02:46 PM
What is GAFFL?

GAFFL connects solo travelers from with similar itineraries to explore destinations together. Whether you are backpacking in Asia, road tripping in Australia, or exploring national parks in the US, simply type the destination you are traveling to, find travelers who are going there at the same time with you, connect with them, plan trips, meet, and travel together.

Hiking up to Everest Base Camp (EBC) in Nepal was one of my dreams in life. I got heavily sidetracked due to work stress for a few years and became a couch potato. I also looked like a potato and I thought there was no way I can climb to EBC being that unhealthy. It was normal for me to avoid all sorts of outdoor activities. I was afraid to face reality.

A mindset like that did not change overnight. I was not happy with myself. Slowly over a few weeks perhaps I was able to face the person responsible for this mess. Myself. The first step was to set a goal. The goal was to simply start exercising regularly. A friend who lived nearby was my workout partner and that helped a lot. After a few sessions, I became sick with shingles. Recovery took about 3 weeks and training was resumed shortly. In 4 months, my weight had dropped by 30 pounds (13.6 Kg). It took a few more months to slowly lose 10 more pounds (4.5 KG). It may not sound a lot for some people, but for me, it was quite a challenge.

I was feeling great and when it was time for my vacation, I was thinking of meeting up with a friend in Asia who had just started his backpacking gap year. As I was looking at possible destinations to meet him at, I thought, why not Everest Base Camp! He did not seem too excited about the idea and without being able to convince any of my friends to join me, I headed out by myself without hiring any guide or porter. Doing this trek solo does not mean you are always alone. I met people at different stops and hiked with them. Every person I met on this trek was friendly and fun to hang out with. 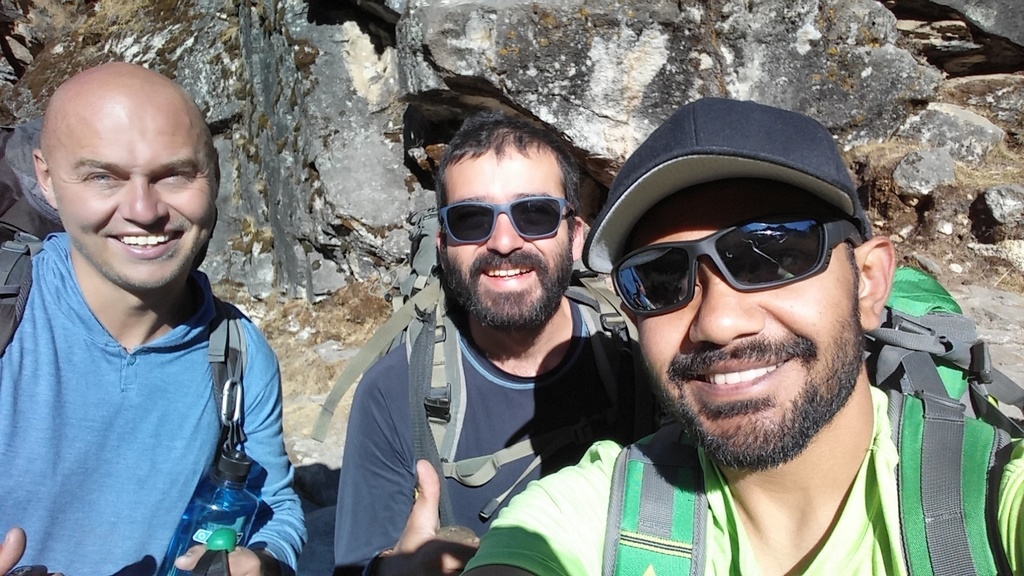 My trekking buddies for most of the trek

This was my first ever trek and I was not well prepared as you will see later. Mid-November, I flew to Kathmandu and gathered the necessary permits. From Kathmandu, the first stop was Lukla. It is supposed to be one of the most dangerous airports in the world. The flight from Kathmandu to Lukla is breathtaking. The plane flew between giant peaks and the panoramic views of the Himalayas will be etched into your mind forever. 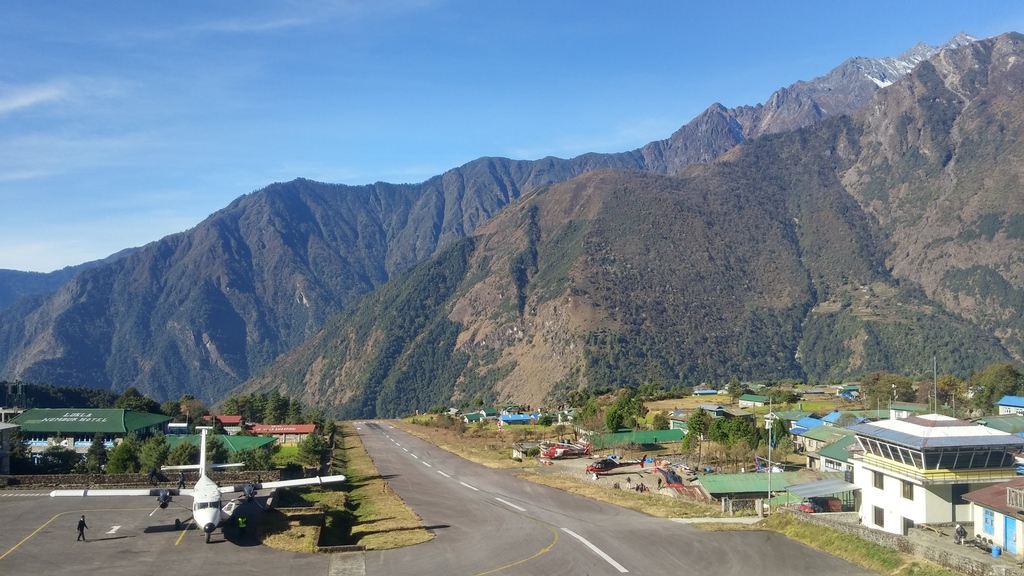 I found a 12 Days EBC itinerary online and followed that. There is no need to book anything in advance other than your flights as you can find shelter and food at tea houses along the way. It feels like you are in an adventure video game where these tea houses are like rest stops.

The first hike is an easy hike to Phakding. It was a breeze despite my slightly overpacked backpack. The second stop which was Namche Bazaar is still my favorite place in the world. It is a small town in the Himalayas where conditions are very hospitable for human life with giant peaks surrounding the town. I had one day of acclimatization there. After a hard hike, hanging out with new friends looking at the stars is what life is about. The night sky in the Himalayas is very special. You can see a ridiculous amount of stars and I was so happy that I packed astronomy binoculars. I was lucky to catch a meteor shower as well. 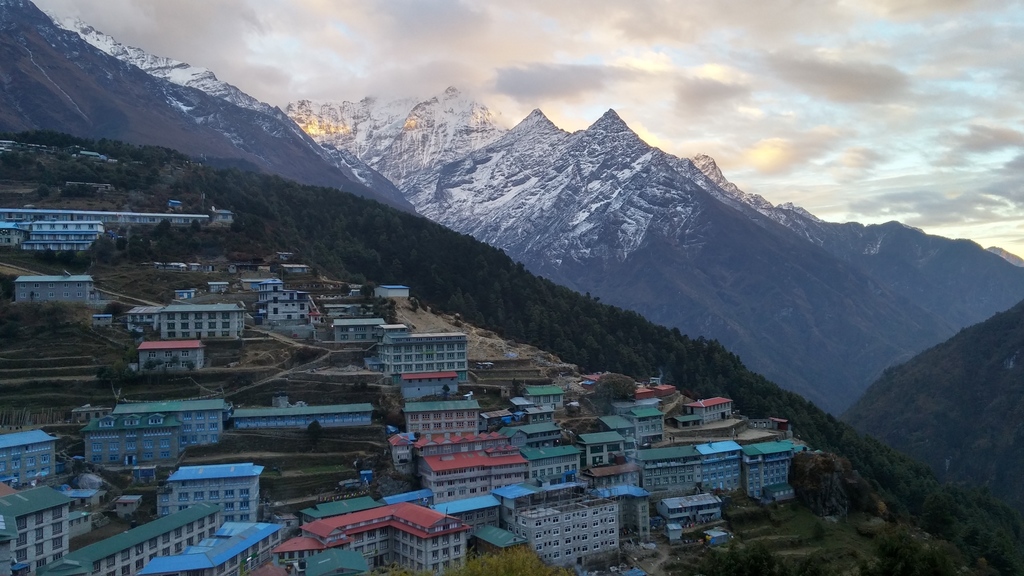 Dal Bhat is the go-to meal for trekkers and dinner time is a perfect time for making new friends. I met some trekkers that were on their way down and most of them looked miserable. Most of them were coughing furiously. This would be a common pattern at every stop moving onwards and I would soon be one of them. 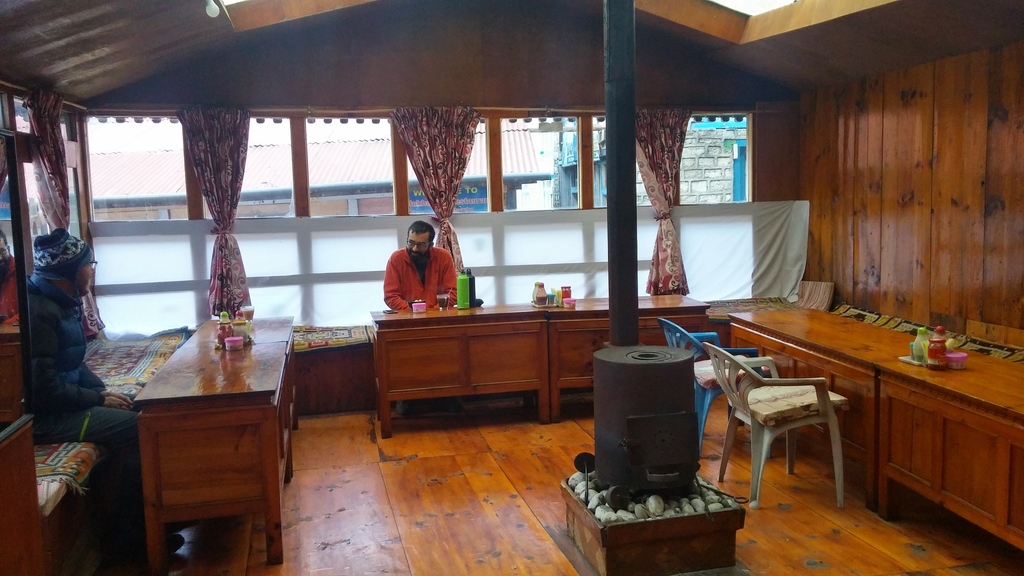 A tea house for trekkers to rest and eat 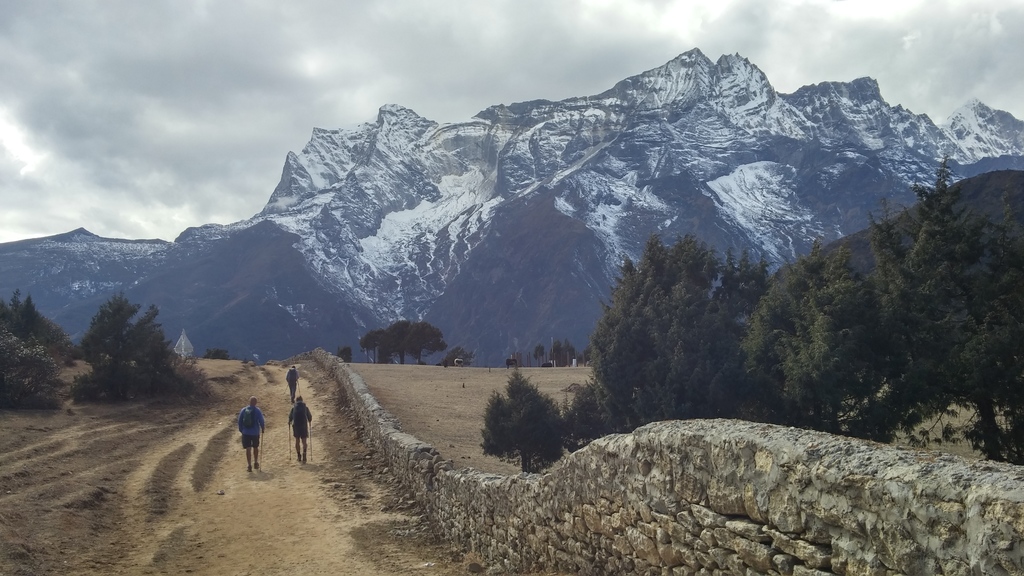 From Namche Bazaar, the next stops were Tengboche, Dingboche, and Lobuche. The trails that lead to these will give panoramic views of monster peaks and take you through giant valleys. These will be views that I will never forget. The Himalayas was the first mountain range I have ever been to, so it was more special for me. The sunsets and sunrises are magical. Especially the sunsets that turn the snow-capped mountains into gold. There is some wildlife such as yaks and mountain goats along the way. Some friendly dogs as well! 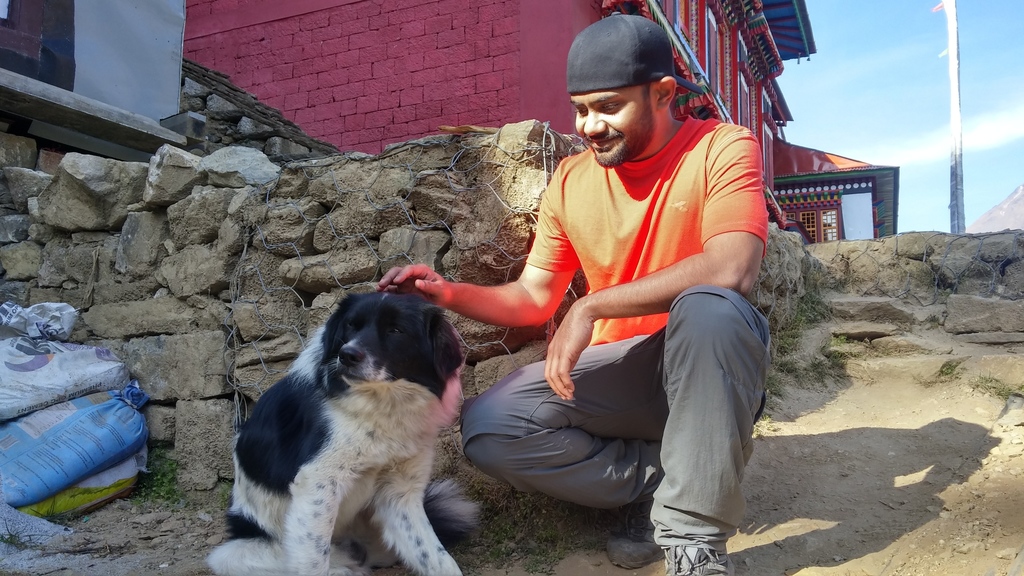 Made a new friend in a monastery 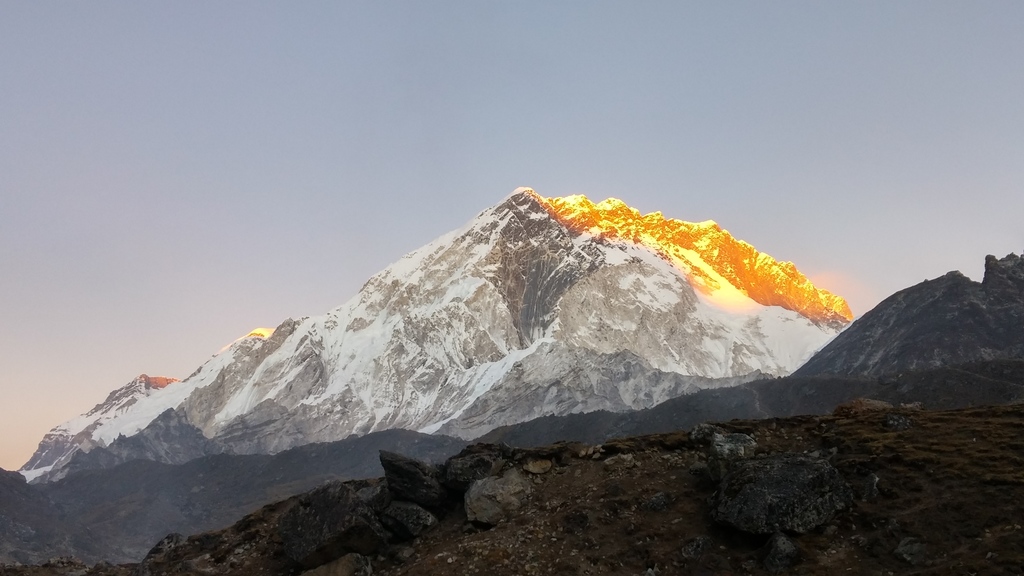 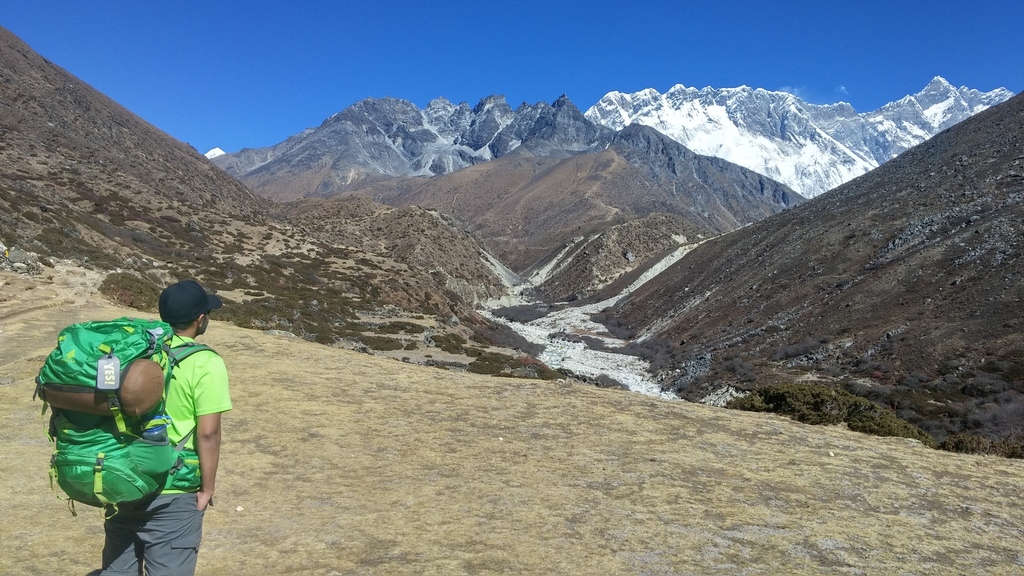 Stopped to take in the view whenever I could 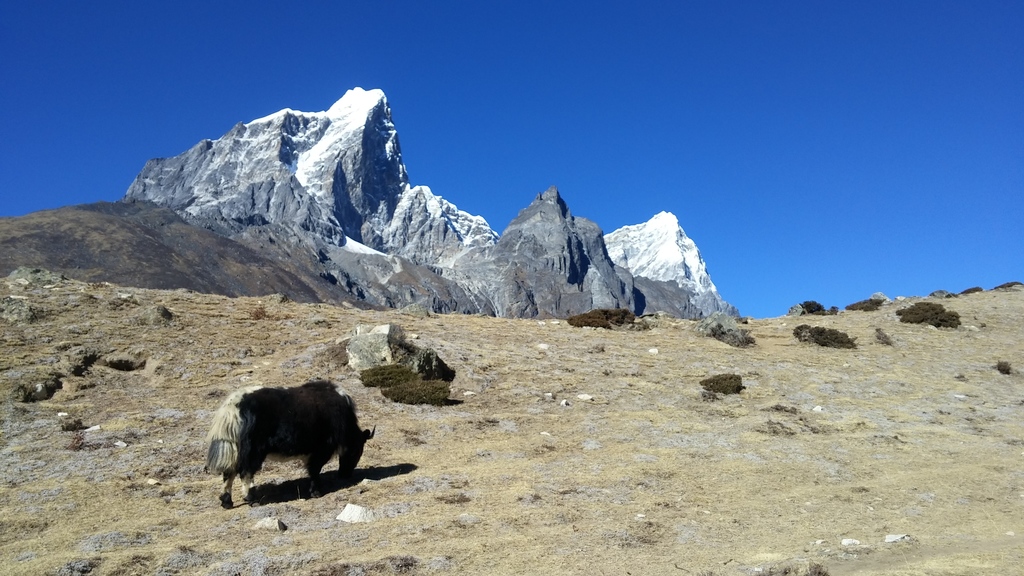 At Dingboche, diarrhea entered the game. By this time, I also had bronchitis and was coughing furiously. Despite all this, one big upside to my health was that I did not have major altitude sickness. Only minor symptoms of it. I cannot emphasize this enough. Please be careful with altitude sickness. Thoroughly research the symptoms and how to react to them. 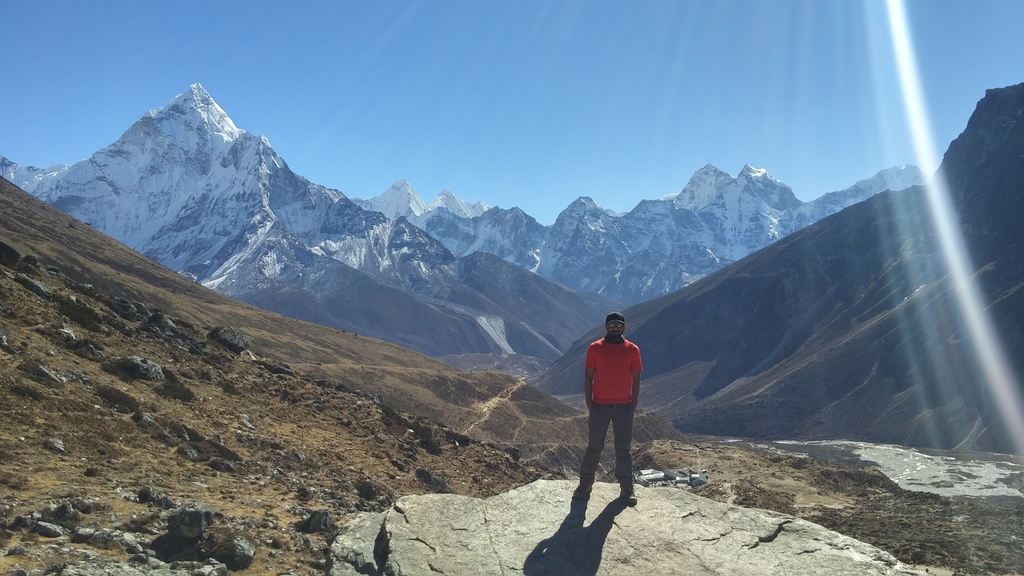 My backpack started to feel heavier and I was getting weaker. It hurt to eat and drink and nothing tasted good. I was living on hot lemon tea mostly. I wanted to make it to Everest Base Camp at least even if I did not reach Kala Patthar (5,664 meters) which was the final peak for my journey. So I pushed myself the next day to reach Gorakshep where I left my backpack and finally reached Everest Base Camp! It was a great feeling. The icing on the cake was to meet fellow Canadians and one of us even had a flag. This was also my first-time face to face with a glacier and there is a massive one there! 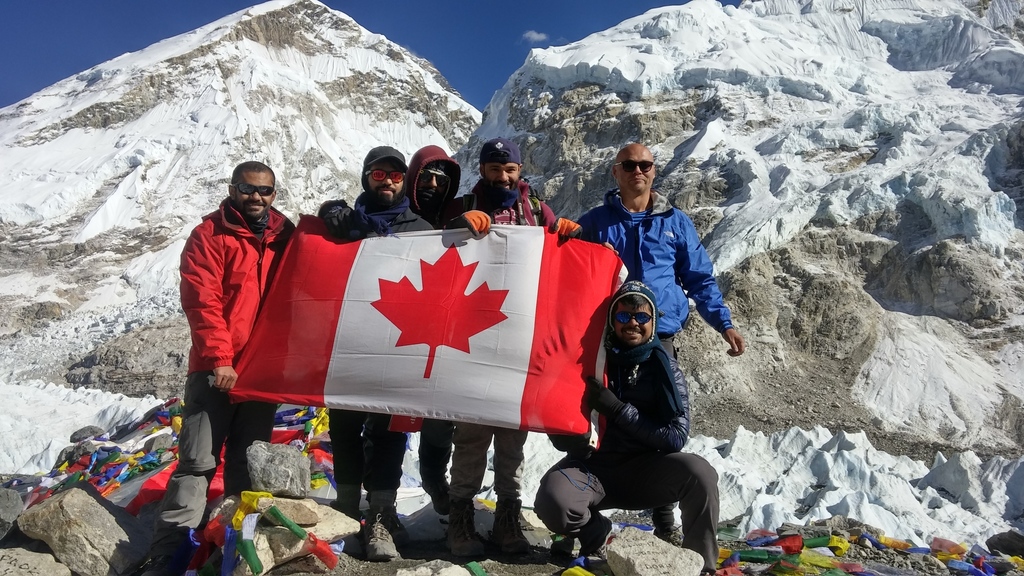 From Everest Base Camp we returned to Gorakshep. Gorakshep is not a hospitable place. It was sunny and clear skies during the day which made it feel not cold at all even at high altitudes. Life at this altitude is harsh. It was -20℃ at night. There is no heating in these tea houses. I had to wear everything I had to stay somewhat warm as my sleeping bag was not that great. A common sound here is that of helicopters. Helicopters carrying people back down who don’t have enough energy to make it back down by themselves. Unlike them, I did not have travel insurance, so that was not an option for me and I was not willing to take that route anyway. Yes, I know. The stupid move not to get travel insurance.

Despite all the sickness, I realized that I may never be able to come back here again. That was a realistic probability. So I wanted to reach Kala Patthar the next morning to give Mount Everest a proper goodbye. The hike to Kala Patthar gives you one of the best views of Mount Everest. Just as I was going to start my ascent the next morning, there was some commotion and news broke out that a trekker had just passed away in one of the tea houses and a helicopter was taking her away. It made me hesitate for a second, but I was so close to my goal and the peak was waiting. I pushed on and reached Kala Patthar. This was a short hike from Gorapshek but one of the hardest days for me because I was out of gas. It took everything to push myself up fighting the crazy winds. Most of the time I was on all fours. At the peak, the wind is so strong that it was difficult to stand up and take pictures. 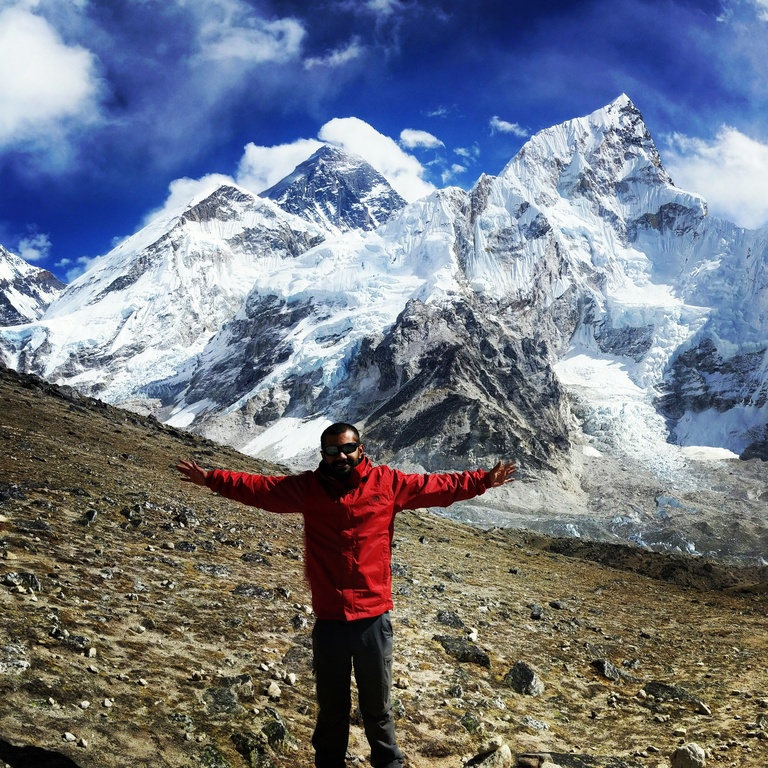 On the way to Kala Patthar

Reaching Kala Patthar and the view of Mount Everest gave me a high that made me fall in love with mountains. Reaching a peak is one of the best feelings in the world. The cold wind was not bearable for long, and it was finally time to start the descent. I returned to Gorakshep to pick up my backpack and the next stop was Periche. I was still with other trekkers up to this point and became alone the next day.

One the second day of going down, the destination was Namche Bazaar. It was 30km away and I was looking forward to it. Dehydration was kicking in, I couldn’t keep any food in, there was blood in my phlegm and I needed to head to Namche Bazaar fast and get some medicine. Having a much slower pace by this time compared to others, I ended up at a point where I was lost with no one in sight. The GPS on my phone was not able to locate the coordinates properly. It was getting dark and I had lost the trail. There was a thick cloud cover hiding everything. Finally, luck was on my side. After an hour, as I was resting and looking for a spot to camp for the night, the cloud cleared and I spotted a Sherpa local.

Following him, I made it to a small village and rested there. Namche would have to wait another day. 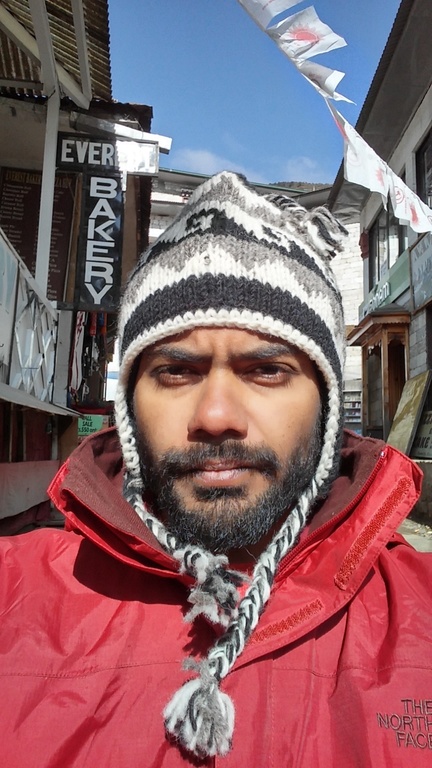 The next day, after a few stumbles and blocking diarrhea by sheer will, I made it to Namche and bought medicine. The antibiotics worked fast and I was feeling much better the next day. From Namche, the last stop was Lukla, the place where the trek started. I had more food and water in the system for the final day and made it there at a decent time. I sat at a cafe while looking at some peaks and reflecting on the whole experience. Despite all the sickness, especially during the descent, it was magical every day. The flight back to Kathmandu was the perfect way to wrap up the Himalayas story. I was looking forward to a hot shower after cleaning myself with wipes for the past 13 days. It took a couple of weeks to heal completely from diarrhea and bronchitis.

I underestimated the Himalayas and the mountains taught me some valuable life lessons. It made me stronger mentally and showed me how beautiful life can be. You just have to go find it.

1. Do not experiment too much with food.

3. Hike slowly and take in the views, there is plenty of time.

4. Do not skip meals and drink 3 to 4 liters of water every day.

5. You can drink water from the mountain. Use a water filter and purification tablets.

6. Carry a paper map and download offline maps on your phone.

7. Pack as light as possible.

8. Stayed disconnected from the rest of the world for the best experience even if satellite internet is available in some places.

This story was originally written by Hamdan. Read on how Hamdan quit his job and managed to travel 16 countries of 4 continents in just 9 months.

Ken Uses Photography As A Vehicle To See & Explore The World! Here’s How He Does It.
9 Months, 16 Countries, 4 Continents: Why I Quit My Job And Started Traveling The World Solo
The Best Budget Travel Tips For Backpacking Australia
How To Travel Around Australia On A Tight Budget
These Nomadic Boys Have Been Adventuring Together For 12+ Years And Inspiring Other LGBTQ+ Travel...
How To Travel Around New Zealand On A Tight Budget